Both DJs/Producers David Greene (aka Dave Goode) and Jonny Murphy (aka Jonny Sonic) were born in Dublin, Ireland. During 2006 they began recording songs in their terrace house in Thomson Street, Darlinghurst, Sydney with two vocalists: Blu (originally from Brisbane and now based out of Sydney) and Ilan Kidron. The Potbelleez signed to their record label Vicious at the end of 2006 and their music was later released by Vicious as the In the Junkyard EP in 2007. They are currently residing in Sydney. The Potbelleez are managed by Myles Cooper and signed to his Phat Planet Music Media company.In March 2011, The Potbelleez began a 14-date sold-out tour with American R&B singer Usher on his OMG Tour. The tour included sold-out shows at Burswood Dome Perth, Rod Laver Arena Melbourne, Acer Arena Sydney, Brisbane and Newcastle Entertainment Centres and was their biggest tour to date.Their music has been featured on TV shows such as Blood, Sweat and Gears, Crunch, So You Think You Can Dance and Australia’s Next Top Model, and their tracks “Junkyard” and “Duuurty Dreemz” became the unofficial theme tunes to Channel Ten’s Big Brother Up-Late show. The Potbelleez also performed “Don’t Hold Back” at the Big Brother Australia finale in 2007 to an audience of 1.9 million people, and their latest single “Are You with Me” was used to open the finale show in 2008. The Potbelleez opened Channel Ten’s live New Year’s Eve television broadcast from Dawes Point under the Sydney Harbour Bridge. This performance was broadcast to over two million viewers on the night. They performed “Junkyard”, “Are You with Me” and “Don’t Hold Back” before the A-League Grand Final of 2008 at the Sydney Football Stadium in February 2008.In March and April 2008, The Potbelleez supported the German band Scooter on their “Jumping All Over the World” Tour in the German cities Leipzig, Dresden, Hamburg, Berlin and Dortmund. Most of the gigs were sold out.The Potbelleez continued to gain success with their Moulin Nights gig at Kings Cross’ Moulin Rouge. Their breakthrough single, “Don’t Hold Back”, debuted in its first week on the ARIA Singles Chart at #36 and reached #14 during next week. “Don’t Hold Back” has achieved #1 on the ARIA Club Chart and ARIA Dance Chart. It has peaked at #5 and was certified Platinum recently, with sales over 120,000. The video was directed by two-time ARIA Award-winning filmmaker James Hackett and shot on location in Kings Cross inside the Moulin Rouge nightclub in Sydney.In 2008, The Potbelleez mixed their first DJ mix CD for Ibiza super-club Pacha, which was released in Australia through Central Station Records. The Potbelleez later mixed for Ministry of Sound Australia’s Sessions Five, which was released in June 2008 in Australia. This release was certifed Platinum with sales over 100,000.The Potbelleez’ follow-up single to “Don’t Hold Back” was “Are You with Me”, which was released in Australia on 31 May 2008. They performed the song at many live events, including an extended version at the A-League Grand Final 2008 and on television show Rove Live.The Potbelleez’ single “Trouble Trouble” was aired on the Hot 30 Countdown exclusively on 25 September 2008. When speaking to Cam St Clair of Sea FM, Ilan Kidron announced that the single would hit shelves mid-October. It hit digital stores at the same time as the album. A music video has been made for the single. The video is of The Potbelleez at a wild party. The video can be seen on YouTube and has appeared frequently on Channel V.On 1 November 2008, The Potbelleez released their self-titled debut album. On 2 November 2008, it was at Number 7 on the iTunes albums chart.In January 2009, the Potbelleez performed songs from their album for the annual Maccabi Junior Carnival at Fox Studios, Sydney. Lead singer, Ilan Kidron, also judged the carnival’s talent quest.In 2008, “Don’t Hold Back” was nominated for an ARIA award at the 2008 ARIA Music Awards.In 2009, their single “Junkyard” appeared as the soundtrack for the Kia Soul Hamster TV commercial which aired in the USA and Canada. “Don’t Hold Back” was also used for a commercial for Jeep Motor Cars.Their song “Hello” is also used as a theme song for the Australian TV channel GO! as their main theme song, shown in comercial spots.The Potbelleez comfirmed that they will release their new album Destination Now sometime in May 2011. The first single from the album, “Hello”, hit Australian radio on 19 July 2010, whilst the second single, “Shake It”, hit Australian radio on 18 October 2010. They have performed these songs live at the AFL Grand Final Footy Show, held at Rod Laver Arena, Melbourne, The NRL Footy Show Grand Final Show at the Opera House and at the Los Angeles Galaxy vs Newcastle Jets soocer match, held at EnergyAustralia Stadium, Newcastle.Their second and latest album titled Destination Now was released on 27 May 2011, after the album was pushed back with its release several times.  The album’s singles “Hello” and “From the Music” both charted in the top 20 of the ARIA Charts at #19 and #16 respectively.

The Potbelleez – From The Music (Original Mix) 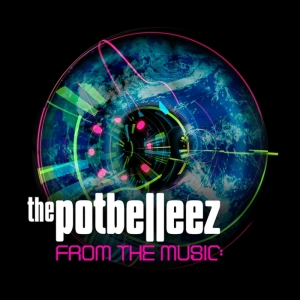